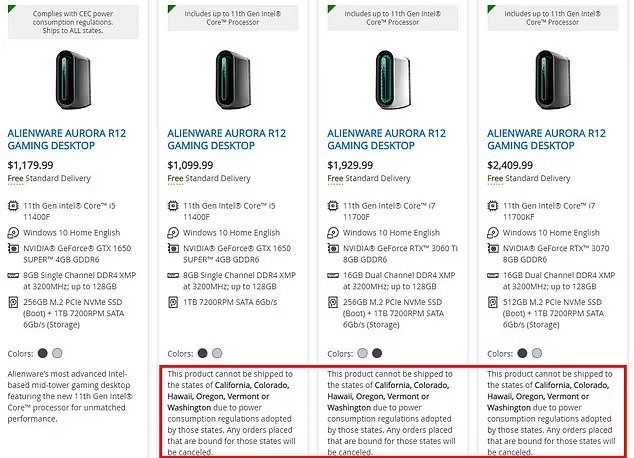 In an unprecedented incident, California local authorities banned the technology company Dell from selling its gaming systems in this state because they exceed the limit on energy consumption set by local law. This decision specifically refers to three of the four versions of the Alienware Aurora R12 PC gamer with Intel Core 11 processor.

In its sales portal, the company mentions that an Alienware equipment consumes an average of 63 kWh in an inactive state, although it can exceed 560 kWh at its maximum power, while the Californian authorities restrict the sale of any technology that registers an annual consumption of between 50 and 70 kWh, a measure also implemented in states such as Colorado, Hawaii, Oregon, Vermont and Washington.

Californian law approved these restrictions on electric power consumption in 2016, though the measures didn’t go into effect until 2019. These decisions were made because California is currently the most populous state in the U.S., as well as being the second most electric consuming state only behind Texas.

California’s high energy consumption records led its public officials to draw up a number of mechanisms to restrict this consumption, so that from January 1, 2019, devices that require an inordinate amount of electrical energy, including the aforementioned Dell Alienware Aurora, were banned. Some experts also consider this move to be an attempt to prevent the establishment of cryptocurrency farms.

The company has already adapted to this legislation, warning on its websites that products prohibited by the authorities may not be sold or shipped to California and the other states mentioned above: “Any orders placed to these states will be cancelled,” Dell says.

In this regard, a spokesman for the California Energy Commission (CEC) mentioned that the regulatory agency is not aware of any supplier having problems with these measures: “In order for their products to be sold in California, manufacturers must undergo various tests in laboratories approved by the CEC and receive a certification to consider it in our databases. ” , mentions the representative.

The post US government has banned sale of powerful gaming computers which can be use to mine Bitcoin appeared first on Cyber Security News | Exploit One | Hacking News.