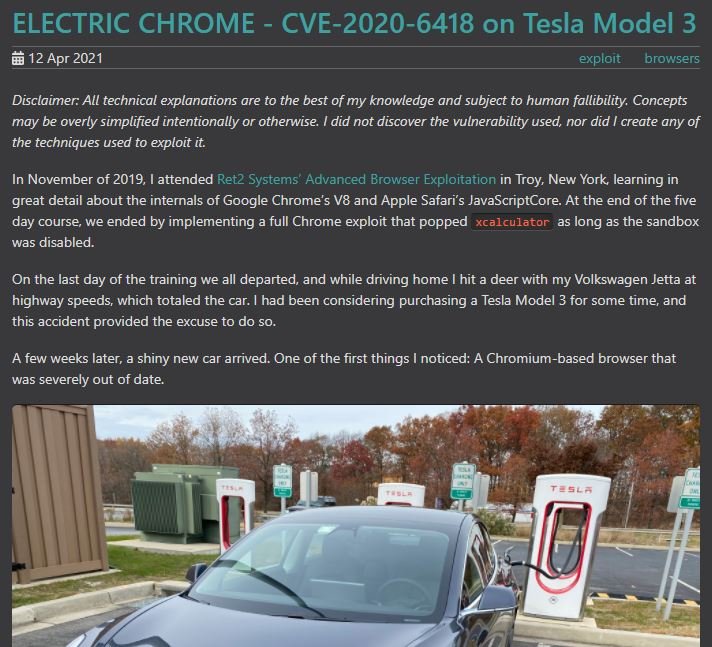 In late 2019 and after purchasing his own Tesla Model 3, Williams began to learn about safety in automotive applications, tracking safety updates and patches for the V8 engine. It was not until February 2020 that he began publishing his astonishing findings on the safety of this advanced vehicle.

Williams notes that the problem is related to a patch-gapping condition, which occurs when threat actors can exploit known vulnerabilities in the period that developers delay in releasing security patches to the general public: “After Tesla released its 2020.4.1 software version, its implementation of Chromium operated with version 79.0.3945.88, which had not been corrected, which makes it highly likely that the browser used at that time was vulnerable,” the expert notes.

To determine the scope of the vulnerability, Williams used the debugged version of the JavaScript engine, which allowed him to identify the V8 project commits for the Chromium version of interest by entering the version number in the desired OmahaProxy console window: “First we need to configure the development environment and build V8 on this commitment. The repository depot_tools contains everything you need to build Chromium and all its components into a standard virtual machine on amd64 Ubuntu 18.04.”

Williams then took about 30 minutes to build the d8 in debug mode on a MacBook Pro computer to launch a primary version of a known exploit, modifying it to run on d8 and not on a web browser, but without getting the desired results.

Williams used git bisect to find out the reason for his flaw and implemented addrof on March 6. After implementing fakeobj he obtained privileges to read and write data, and a day later, the researcher was able to run the shell code and understand that it was a sandbox.

Vulnerability in Open Distro allows the deployment of multiple cyberattacks

How to identify a phishing email

[Release] Check if your website passes the OWASP Top 10 test!