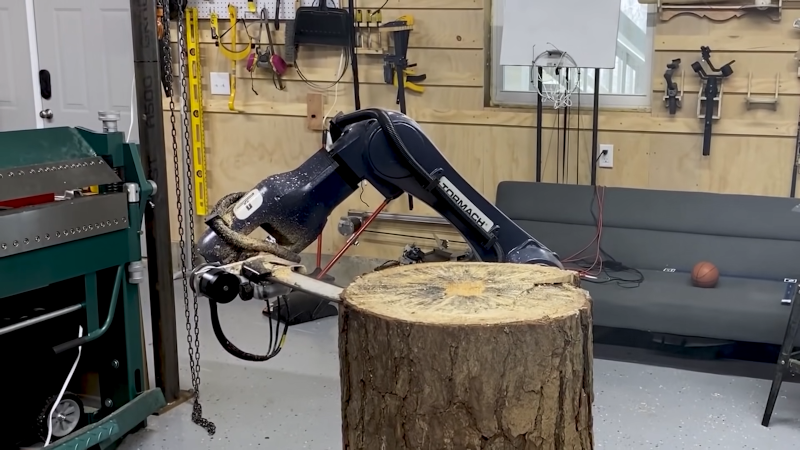 You can spend a lot of time trying to think of a clever title for a post about a CNC chainsaw. But you’ll finally realize, what else can you say but “CNC Chainsaw?” [Stuff Made Here] actually built such a beast, and you can watch it go in the video embedded below. A custom chainsaw on a Tormach robotic arm. So it is more like a robot using a chainsaw than a conventional CNC machine.

Instead of an XY motion, the machine uses what the video calls an “apple peeler” method and uses the Minkowski algorithm to adjust for the size of the chainsaw. The video is an odd juxtaposition of advanced topics like the Minkowski and basic things like G code.

The chainsaw needed to keep a low profile, so it actually started life as the business end of a pole saw with drive courtesy of a skateboard motor. However, the cutting speed didn’t meet expectations, so that caused a change to the algorithm.

Some of the sketches to illustrate comments are pretty good and give a good idea of the issues involved. Like many things, it seems easy until you try to actually do it. Sadly, his saw got overheated so he finally switched to cutting foam instead of logs. With the right tool, however, the log should work. Maybe that’s version two.

Before you get too excited, you should know the arm used says it costs “under $20,000” so this probably isn’t a weekend project with your birthday money. Still, the problem-solving that went into it is interesting and you could probably figure out a cheaper way to do an arm if you didn’t buy it off the shelf.

Overall, this is a great story and the final product was surprisingly good considering how coarse the saw is. We liked the math and problem-solving behind the killer chainsaw CNC.

We don’t know if a different DIY chainsaw might work better. Not the first killer chainsaw robot we’ve seen, by the way.

Gaming With 1 Horsepower Of Rumble Feedback

Sanity Check your Engines with this Dynamometer

A Lot of Effort for a Pi Laptop