A Brief History of Optical Communication 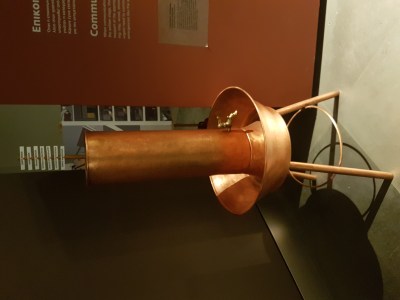 We live in the information age where access to the internet is considered a fundamental human right. Exercising this right does largely rely on the technological advances made in optical communication. Using light to send information has a long history: from ancient Greece, through Claude Chappe’s semaphore towers and Alexander Graham Bell’s photophone, to fiber optical networks and future satellite internet constellations currently developed by tech giants.

Let’s dive a little bit deeper into the technologies that were used to spread information with the help of light throughout history.

Since light can travel in air much further than sound, visual communication has always been the method of choice to broadcast information over long distances. One of the earliest examples is the Phryctoriae from ancient Greece, a system of towers build on mountaintops that could send messages by lighting torches. Allegedly, this is how the news of the fall of Troy was spread throughout the country. The Greeks came up with different methods of encoding messages. One was to have two groups of five torches where each torch would represent the row and column in a 5×5 matrix of Greek letters known as the Polybius square. The other is the hydraulic telegraph which consisted of a container filled with water and a vertical rod floating within. The rod was inscribed with various messages along its height. When the remote torch signal was received, water from the container was slowly drained until the torch went out again. Through the position of the inscribed rod, the water level could be correlated with a specific message.

In the late 18th century the Chappe brothers devised and erected a network of semaphore towers in France for military communication. On the top of each tower was a semaphore comprised of two movable wooden arms connected by a crossbar. By adjusting the angle of each arm and the crossbar a total of 196 symbols could be displayed which were observed from the next tower with a telescope. By waiting for the downline station to copy the symbol, the communications protocol already included an ACK signal as a means of flow control. In terms of data rate, the system could reach about 2-3 symbols per minute; taking about two minutes for a symbol to travel from Paris to Lille over 22 stations and 230 km.

In the late 19th and early 20th century, the heliograph was widely used for military communication. It consisted of a mirror that could be pivoted or blocked with a shutter to generate flashes of sunlight and was mostly used to transmit Morse code. Even though the heliograph was rendered obsolete by most armies in the 1940s it was still used by Afghan forces during the Soviet invasion in the 1980s and is still included in many survival kits for emergency signaling.

Many of you probably know the kind of DIY projects where an audio signal is transmitted by a laser beam which is surprisingly easy to build. The invention goes back to Alexander Graham Bell, who in 1880 invented the photophone which he thought to be his “greatest invention ever made, greater than the telephone”. It could transmit speech wirelessly using a flexible mirror mounted at the end of a speaking tube to modulate the intensity of the reflected sunlight. The receiver part consisted of a selenium photocell at the focus of a parabolic mirror. Bell and his assistant Tainter also build nonelectric receivers using materials coated with lampblack thereby discovering the photoacoustic effect. Even though Bell was immensely proud of his invention up to the point where he wanted to name his second daughter “photophone”, the device never really hit it off. This was mainly because radio wave transmissions as pioneered by Marconi a few years later far surpassed the distance achievable with light and did not require a direct line of sight.

Apart from a few military projects, telecommunication in the 20th century was mainly conducted via coaxial cables and microwave signals in the relatively low frequency 1-10 GHz range. This was until the development of fiber-optic communications in the 1970s, which was enabled by the invention of low-loss optical fibers and semiconductor lasers.

The main drawback of high-speed communication via coaxial cables is that signals have to be repeated about every kilometer to make up for cable losses. With wireless radio frequency (RF) communication, the repeater spacing can be a lot larger, but in both cases, the bandwidth is limited to ~100 Mbit/s due to the “low” frequency of the RF carrier.

The frequency of visible and infrared light is about 1014 Hz, much higher than the 109 Hz “Gigahertz” frequencies used for RF communication. As a consequence, the optical spectrum is about 2600 times wider, in terms of frequency, than the entire RF spectrum. This broader bandwidth enables much higher data rates.

One of the first applications of fiber optics included the control of short-range missiles through a fiber optic tether attached to the back of the missile that rapidly unspooled during flight. In 1977, General Telephone and Electronics sent the world’s first live telephone traffic through a fiber-optic system at 6 Mbit/s. Today, the worldwide optical fiber network is estimated to span more than 400 million kilometers, close to three times the distance to the sun.

Internet From Your Light Bulb

We still mostly use the RF spectrum for wireless communication, but there has been some renewed interest in wireless optical. At short distances, this goes under the catchy name LiFi and became a trendy topic about 10 years ago, partly triggered by this TED talk. It advertised the idea of using the already existing infrastructure of regular LED lighting for data transmission.

Some of the advantages being that it is more efficient, more secure against eavesdropping, and enables higher bandwidths. However, the idea of having your WiFi at home transmitted through your light bulbs never really became popular. Arguably one of the reasons might be that having a connection that depends on light shining onto your device is not always considered an advantage. Up to now, LiFi is only used in some industrial applications where electromagnetic interference or security are important issues. But lower bandwidth versions are prime areas for hacking.

The optical transmission of data over long ranges goes under the name free-space optical communication (FSO). You may remember Facebook’s Aquila drone program, a giant solar-powered vehicle that should stay in the stratosphere for months to beam internet to remote areas. In addition to standard GHz frequency bands for air-to-ground communication, they were also experimenting with free-space optical links. The technology behind this is still similar to Bell`s photophone, although we now use IR lasers instead of sunlight. Shortly after Facebook canceled its Aquila drone program in 2018, it became public that they are working on a similar system that uses satellites instead of drones due to technical difficulties. In September 2020, Facebook’s subsidiary PointView Tech launched the Athena satellite which is supposed to test a laser ground link.

Google (or Alphabet if you prefer) is/was working on similar projects called Loon and Taara. Maya Posh just wrote a more detailed article about Loon. Its goal was to send a network of high-altitude balloons into the stratosphere providing internet access to underserved areas, but the project was shut down a few weeks ago. Within project Loon a 155 Mbit/s laser communication between two balloons more than 100 km apart was achieved. Project Taraa builds on this success and aims at developing towers that use free-space laser communication to deliver 20 Gbit/s connectivity over distances of 20 km. Compared to installing fiber optic cables, this would be a cost-effective and quickly deployable way to bring high-speed connectivity to remote areas.

Similar systems are already commercially available by a company called Koruza delivering up to 10 Gbit/s, albeit over a modest range of 150 m. Of course, hackers have also played around with the technology. Way back in 2001, the open-source project Ronja provides instructions to build a low-cost transmitter-receiver pair capable of 10 Mbit/s communication over a 1.4 km range. As a transmitter it just uses a standard red LED collimated by large lenses salvaged from magnifying glasses. Ronja works in most weather conditions including rain and snow but fails during fog.

This marks one of the major downsides of FSO. While requiring a direct line of sight makes communication more secure, it also imposes some restrictions. Cloudy weather can make satellite-to-ground communications break up, so microwave signals are considered more viable in this case. However, future internet satellite constellations like SpaceX’s Starlink, OneWeb, or Amazon’s Project Kuiper are likely to use laser communication as a secure, high bandwidth link in between satellites. At the forefront of developing this hardware are the German companies Tesat and Mynaric. Their laser systems currently offer data rates of up to 10 Gbit/s between LEO satellites and ground stations and 1.8 Gbit/s between geosynchronous satellites up to 80,000 km apart.

The advancement of optical communication from the ancient Phryctoriae to modern laser communication was driven by the goal to expand humanity’s interconnectedness. Since the beginning, the communication data rate has increased by ~12 orders of magnitude and culminated in a space race to provide global broadband access via satellite networks. Bringing internet access to underserved areas is certainly a noble goal but we may also question the meaningfulness of enabling ever-higher bandwidths when it is mostly devoured by video streaming. Although there is no strict fundamental limit to the bitrate achievable with optical communication it also interesting to ask the question of what comes beyond, perhaps neutrino communication?

Street-Legalize Your Ebike With A Magnet

Shredding The Ice With Powered Skates

The Teams Dashboard: Behind the Scenes