Ransomware hacker is arrested for attacking and extorting multiple companies 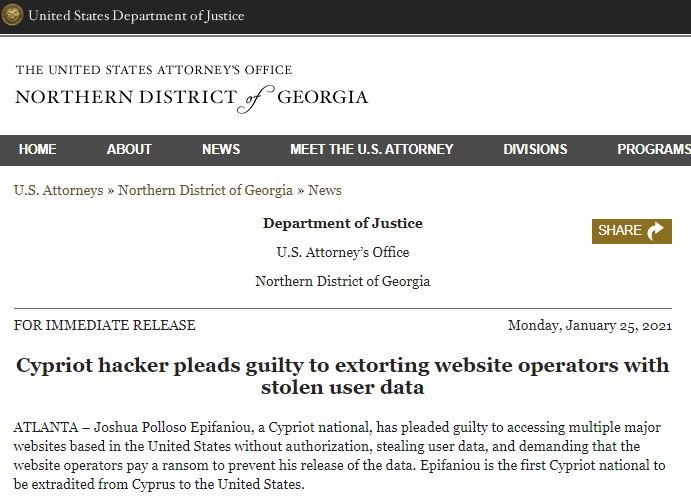 A report from the U.S. Department of Justice (DOJ) reveals that an individual from Cyprus has pleaded guilty to unlawfully accessing multiple American websites in order to steal confidential information and demand ransom payment in exchange for not posting it on hacking forums.

“Joshua Polloso Epifaniou, 21, acknowledged using all kinds of hacking methods to compromise the security of these websites for malicious purposes,” says Acting Federal Prosecutor Boby L. Christine. Epifaniou became the first individual to be extradited from Cyprus to the United States.

According to the DOJ, between October 2014 and November 2016 the Cypriot citizen began analyzing some websites looking for possible attack targets based on their levels of web traffic being just a teenager. After defining his victims, Epifaniou began working with some accomplices to steal confidential information stored by compromised websites.

This cybercriminal group stole information by exploiting security vulnerabilities on the attacked websites, or by deploying credential theft campaigns against the administrators of these platforms. After compromising the information, Epifaniou and his accomplices used proxy servers in foreign countries to contact affected administrators and make them know their ransom demand.

Among the victims of this cybercriminal group the DOJ enlisted:

Epifaniou’s plea agreement also includes a payment of about $600,000 USD as compensation to the affected companies, plus a payment of €70,000 to the U.S. government. The defendant pleaded guilty for charges like conspiracy to commit fraud, electronic fraud, extortion and illegitimate access to computer systems. Epifaniou will hear his sentence on March 3, unreserved for the prosecution to defer his trial to present further evidence.

On the other hand, the Federal Bureau of Investigation (FBI) mentions that Epifaniou’s arrest was made possible by the arrest of his accomplices, who face justice in Cyprus. The Office of International Affairs of the Criminal Division and the U.S. Attorney’s Office for the District of Arizona also collaborated in the investigation of this fraudulent scheme.